Way back in November 2015, I wrote a post asking people what came to mind when they thought about the word “librarian.” I got lots of wonderful answers and have finally gotten my act together and created a word cloud with the results. Behold! 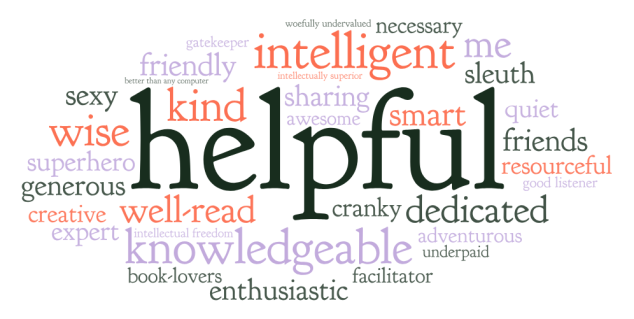 In my word cloud, as you might expect, the size of each word corresponds to the frequency of the replies I received. So, as we can see, the word that most people who responded to my (informal and highly unscientific) survey thought of was “helpful”. The second most common answer was “knowledgeable” followed in popularity by “dedicated,” “intelligent,” and “well-read.”

I was pleasantly surprised by so many positive attributes being associated with librarianship. Of course, I think most librarians are the greatest thing since sliced bread. And chances are that someone who’s reading my blog probably thinks the same way. However, I’m always prepared for the possibility that people have had negative experiences with librarians and don’t automatically think of positive words. This was reflected in my survey with one response each of “cranky” and “intellectually superior” (although with that last comment I can’t tell if it means “think they’re smarter than everyone else” in a bad way, or actually means “are smarter than others” in a good way.)

So, what do you think? Are you surprised at any the words or phrases that appeared in this little experiment. If you were to play this word-association game today, what adjectives would leap most readily to mind?

The Adventures of Library Heather by Heather Elia is licensed under a Creative Commons Attribution-NonCommercial 4.0 International License.
Based on a work at http://libraryheather.com.